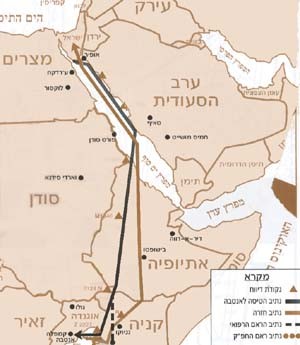 In the early part of the critical week beginning Sunday June 27, Yoni was engaged in a military operation which is still to this day classified, shuttling twice from Sinai to central Israel. Early Monday morning he spent a few hours with his troops at Lod airport. A hijacked Air France plane, with scores of Israelis on board, had just taken off from Libya after a brief stopover there, and it was not known whether the hijackers might land the plane in Israel.

The plane, however, did not proceed to Israel but turned southeast, in the direction of East Africa, and landed that morning at Entebbe airport in Uganda.There, the four terrorists who had hijacked the plane, two Germans and two Arabs, were met by several other Arab terrorists. The hostages were taken to the airport’s old terminal building.There they were held under guard by the army of Uganda, whose head, the notorious Idid Amin, colluded with the Arab terrorist organizations. The terrorists demanded the release from jail of over fifty of their colleagues, most of whom were behind bars in Israel, a few in other countries. The deadline for their release was set for Thursday afternoon. Israel was warned that if by that date the jailed terrorists were not released, the hostages would be killed.

Late Tuesday and Wednesday, some low-key discussions took place among Israeli army strategists about the possibility of rescuing the hostages. Yoni was kept informed of these discussions, although he was still tied up with other operations of his Unit (the Sayeret Matkal). For the time being, the discussions led nowhere. But on Wednesday night Yoni received word that the talks seemed to have taken on a more meaningful tone.

“On Wednesday evening the phone calls began to come in,” recalls Avi, the Unit’s head of intelligence, who was with Yoni in Sinai, “informing us that a directive had been issued for the Unit to start planing [a rescue operation]. During the night there were quite a few calls…mostly from Muki [an officer of the Unit who was to be Yoni’s number-two man in the raid]. Muki was pressing us to return to Israel, because he was repeatedly asked: ‘When can Yoni get here?’…With every phone call you said to yourself, ‘Maybe there’s a chance that something will happen after all.’ The pressure was pretty serious, and we understood that by the next day, first thing, we’d have to fly back.”

Yoni did indeed fly north on Thursday once he could manage it, probably late in the morning. That morning, however, with the ultimatum nearing its deadline and with no acceptable rescue plan available, the government of Israel decided to negotiate with the terrorists, stating its willingness to release terrorists for hostages. By then, most of the non-Israeli hostages had been released and flown from Entebbe to Paris. Of the 106 hostages remaining in Entebbe, most were Israelis. “My intention was not to use a ruse or a tactical ploy to gain time,” Prime Minister Rabin wrote of his government’s decision, “but to enter into serious negotiations, with Israel fulfilling whatever commitments it made.”

With the release of the non-Israeli hostages, important information started to come in on the state of affairs in the old terminal at Entebbe. Such information was crucial for planning any rescue, and so the military option had acquired momentum. By evening, Yoni received the formal order to start planning and preparing the Unit for a possible raid on Entebbe.

Landing C-130 transports directly at the airport of Entebbe was considered a feasible way of bringing in the rescue force. Sayeret Matkal, the Unit that Yoni commanded, was given the brunt of the job. It had been ordered to take control of the old terminal building, where the hostages were being held and where the terrorists and the Ugandan troops were positioned, and was also to seal off the whole area from any possible counterattack by the Ugandan army until the planes could take off.

“The instructions were extremely general,” says Biran, the intelligence officer of Dan Shomron, the man who was given overall command of the ground operation. “Yoni had logistical questions … for which we as yet had no answers. Everything was still up in the air.” In the meeting between Yoni and Shomron and their staffs, “we still did not go into specifics about who, how many, how, and what. It was obvious that all this would have to be studied and developed. As for the Unit’s plan of action, Shomron did not get involved. He said: ‘These are men who know their job. There’s no point for me to interfere.’ ”

Yoni returned to his Unit, gathered a few of his officers at his office, and started formulating with them the Unit’s plan of action for the rescue at Entebbe. For a while, Colonel Ehud Barak, who left the following day for Kenya to coordinate the eventual landing of the planes there, also sat in at the meeting.

All the while, intelligence information concerning the hostages and terrorists, as well as about the layout of the old terminal building, was filtering in. After several hours of brain-storming, some of which Yoni did by himself later, in the middle of the night, the Unit’s preliminary plan of action was formed. Altough certain revisions would be made by Yoni during the following day and a half, the plan for the most part remained unchanged. In fact, it was carried out almost to the letter.

The plan called for the Unit’s initial force of twenty nine men to be flown to Entebbe and to land at night near the new terminal. From there the men were to proceed to the old terminal, arriving in a Mercedes and two Land Rover jeeps, the kind of vehicles frequently used by the Ugandan army. It was hoped that the Ugandan guards surrounding the building would assume that this was a force of their own, perhaps the one that accompanied President Idi Amin on his occasional visits to the hostages. In this manner, it was hoped that the Unit’s men would be able to approach the Ugandan guards without first being fired upon.

“According to the intelligence we had at the time, there were dozens of Ugandan guards,” explains Avi. “Yoni was adamant that we had to find some sort of solution to the problem concerning the Ugandan security belt.” Thus they came upon the idea of the Mercedes and jeeps, which was meant to “delay opening of fire by the Ugandans as long as possible.” Ideally, the guards might even wave the vehicles through. However, should they want to check the vehicles and their passengers, “our men would have to open fire,” continued Avi. “They would be at the point of no return anyway.”

The remainder of the plan was as follows After the possible encounter with the guards, the force would proceed rapidly to the building, get out of the vehicles, and run to the various entrances, the squads entering their assigned entrances simultaneously. Several squads were assigned to the two main halls on the ground floor where the hostages were thought to be held; other squads were assigned to the top floor, where Ugandan soldiers were stationed; while some commandos were to clear the other rooms on the ground floor that were occupied by the terrorists. Yoni and his command team would position themselves outside the main entrance in order to be able to control the flow of men and, in case of a hitch, go in. At the second stage of the mission, a second force of the Unit, driving in four APC’s, would land and quickly proceed to the old terminal, cordoning its environs from any possible counterattack by the Ugandan army. Besides the large Ugandan force believed to be stationed in the old terminal, there was an Ugandan regimental air force base some 200 yards from the building.

The Unit’s officers convened around 1 A.M. to receive an initial briefing from Yoni and instructions on preparations. “Yoni was very tired,” recalls Muki. “You could see it by looking at him. Actually we were all tired from the whole week we had just finished, the officers in particular. So at a certain point I suggested that we stop and get some sleep. This was around 2 or 3 A.M. on Friday morning. Yoni agreed, and the small planning team went to sleep, but it turned out later that Yoni remained alone at his office and continued to work on the plan. And in fact, when he presented the plan at 7 A.M. the following morning, after sleeping at most one or two hours, I saw how far he had carried the work from where we left off. There were many points in the plan that we had not considered, which Yoni had thought through to the end. That morning he presented the plan complete, perfect, down to the last detail.”

The site design and hosting is with assistance of
P.C.I.C - IT & software development for businesses (Hebrew).